Willow has not started school yet in Chiang Mai, so we had two extra days in the country, and then some sight-seeing time in Chiang Mai. We are amazed at the constant nooks and crannies of all sorts of restaurants, shops, coffee houses, 7-Elevens, massage businesses, temples . . . but the traffic is ridiculous and stinky, and relentless. It never stops. A person just needs to step out in front of it and hope the drivers will stop. Talk about car culture, it is here with a vengeance.

We are staying in Old Town, which is a fairly large square surrounded by a moat and a wall for much of the way. I hear that Thailand was never colonized, but this wall seems like a fortification for something. It is definitely tourist Mecca and the streams of traffic mostly stay out of the little twisty roads in Old Town, though the motorbikes weave through it all.

Our first introduction to Chiang Mai was with a new friend named Meera, whom we met at Earth Homes Farm, where she volunteers and also where she took the same course as Willow. Her home is Bangkok, though she is East Indian. She does speak Thai and had lengthy conversations everywhere we went about all the details. Now our conversations are very basic and based on relationship of someone here to serve our needs. It is not very satisfying, not knowing any of the language, but people continue to be incredibly kind and helpful. It is humbling speaking English and having all people around me be at least bilingual and cater to my lack of knowledge. I met some people from England yesterday in a Thai cooking class who expressed the same sentiment.

I have a little book of Thai words to help me, but figuring the pronunciation is key, and small words stretch out in curving tones which ride the vowels. 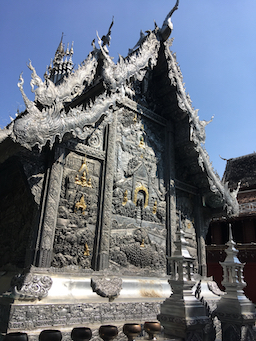 As an example, I was at the Silver Temple, which is completely covered with aluminum sheets that have been pounded and tooled into intricate pictures that depict stories, or sacred images, and flowery designs. I was watching an artisan pound out a bowl, and I was amazed at his hands, which seemed to have formed around the bowl and his hammer. I looked up the word for “hand” and saw that it was “meu” which is pronounced like the French “bleu,” but until I said the word a few times and pointed to my hand as well, he did not have a clue what I was saying. Later Dr. Nha, who gave me a supremely deep Thai Massage, and whose talented hands inspired me to try again with “meu,” understood enough and taught me the right way to say it. It is a long diphthong that goes up and then dips down and around. It is a great word, totally befitting the greatness of hands! 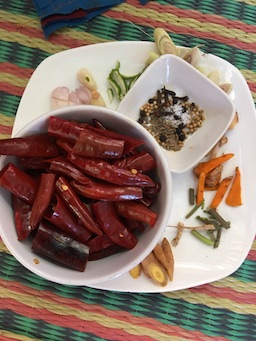 Yesterday, I took a cooking class at an organic farm, Smile Organic Farm. It was very fun and informative, and they have it well worked out to get people cooking a variety of related dishes. I was amazed to make dishes that tasted like the food I have come to love, but never cooked. We even got to make chili paste, and I was on the Massaman Chili Paste team. We used a very large mortar and pestle and a very large amount of red chilies along with cloves, star anise, cinnamon, and curry powder, and much more. Luckily they have given us a recipe book to use when we get home. I was cooking with an international group of people, and I am loving meeting people from all over the world.

← Farm to CityNanny Crosses the Border →
Scroll To Top